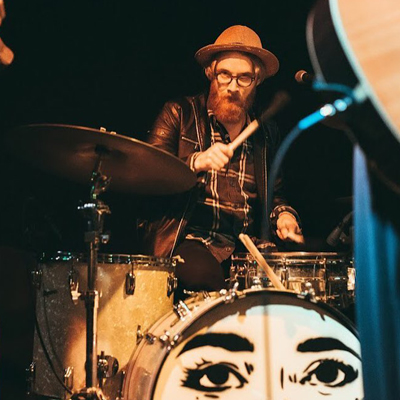 William J Locker is a musician/recording-artist based in Des Moines, Iowa. Mixing sounds of rock, blues, country, gospel and pop, his newest record REDHEAD is his own low-fi and fuzzy take on rock and roll. Catchy lyrics interacting with the contrasts of relationships, love, and life. Locker grew up in a musical family, that played music through the house while his dad’s and brother’s bands were practicing in the basement. Raised on the Stones, Will developed a love for backbeat-driven songs before owning his first drum set at the age of fourteen. He has toured the U.S. playing drums for many bands since the age of seventeen. During a recent hiatus he used his free time to write and record his first solo album titled REDHEAD, which he debuted live at SXSW in 2015.

Using a beat up Fender acoustic guitar, Will imagined and wrote the songs in his head as grandios rock anthems inspired by the music of his childhood. He played most of the instruments on the record, including drums, guitar, bass, and vocals. With the help of his brother, Jon Locker (The Nadas, Bonne Finken) and Neil Stoffregen, Will was able to jumpstart his Record at The Sonic Factory Recording Studio and had it mixed by Matt Sepanic (Slipknot), the album serves as a document of his musical journey from the back to the front of the stage. William still spends most of his time on the drum seat, supplying vicious drum grooves with a number of bands and artists from the midwest. Amongst those artists is his wife, Nella Thomas. When he is not playing shows, William teaches drum lessons and rock band classes at the Central Iowa Music Lab, while continuing to write and record future projects.