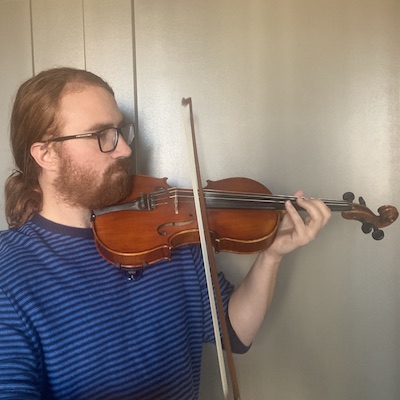 Nathan Thiessen grew up in Davenport, Iowa and began playing violin in the fourth grade at their summer music program. He started taking private lessons in the fifth grade and fell in love with the instrument. He would play in the Quad City Youth Symphony Orchestra, in solo competitions, and made all-state. He attended college and double majored in music and history. While in college, he played in many different local bands. He also began playing bass guitar and piano. At school, he was the winner of the Concerto Aria Contest and toured with the Central College Jazz band in Mexico on his violin. After graduating college, he worked at a local church for a year as their worship director and taught violin lessons at the Central College Music Academy. In the summer of 2016 he began touring with the band Foreverlin as their bassist and would be with them until 2018 when they broke up. During this time he moved to Des Moines and has played in several local bands, including Seth Cloe and The Silver Liners, Kickstart the Sun, and L and N Music.